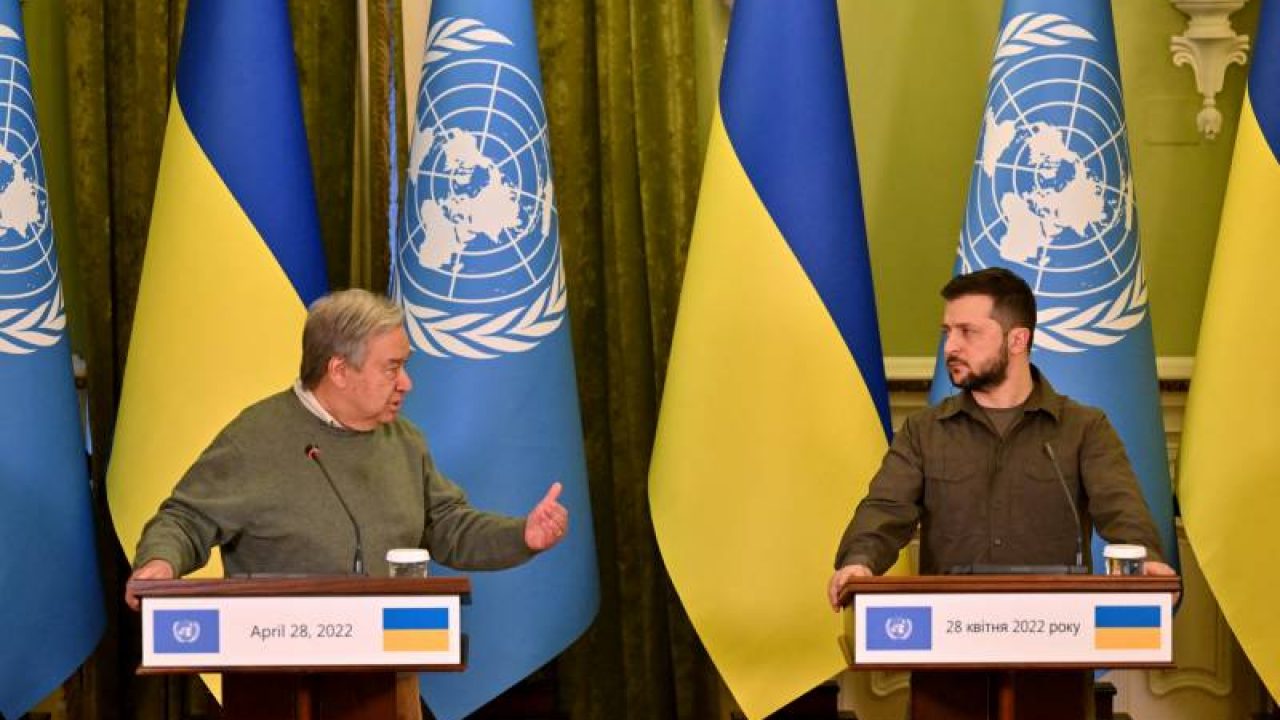 The Russian Ministry of Defense confirmed on Friday that it carried out a “high-precision” airstrike on Kyiv during the visit of United Nations Secretary-General Antonio Guterres to the Ukrainian capital.

“Long-range and high-precision air weapons of the Russian Air Force destroyed the premises of the Artyom Missile and Space Corporation in Kyiv,” the ministry said during its daily briefing on the conflict in Ukraine.

According to a report, Ukraine acknowledges heavy losses from attack but says invader’s casualties are ‘colossal’

Moscow has confirmed it carried out an airstrike on Kyiv during a visit by the UN secretary general, António Guterres, as Ukraine acknowledged heavy losses from Russia’s attack in the east but said the invader’s casualties were “colossal”.

The defence ministry in Moscow said in its daily briefing on Friday that two “high-precision, long-range airbased weapons” had destroyed the production buildings of the Artyom missile and space enterprise in the Ukrainian capital on Thursday night.

The mayor of Kyiv, Vitali Klitschko, said on Friday one body had so far been recovered from the rubble of a 25-storey residential building in the capital’s Shevchenkivskyi district after the strike, which Guterres’s spokesperson described as “shocking”.

Radio Free Europe/Radio Liberty, the US funded media organisation, said one of its staff, the journalist and producer Vera Gyrych, had died “as a result of a Russian missile hitting the house where she lived” in one of the strikes during Guterres’ visit.

The missile attack, which came a day after Guterres met the Russian president, Vladimir Putin, in Moscow and soon after his talks with Ukrainian leader Volodymyr Zelenskiy, drew international criticism and a furious response from Kyiv.

The Ukrainian defence minister, Oleksiy Reznikov, on Friday described the strikes – denounced by the foreign minister, Dmytro Kuleba, as a “heinous act of barbarism” – as “an attack on the security of the secretary general and on world security”.

Lord Malloch-Brown, the former UN deputy secretary general, said the international community “will recognise they cannot have their UN secretary general treated in this disrespectful, casual and frankly, dangerous way, by Putin”.

Zelenskiy said overnight that the attack “says a lot about Russia’s true attitude to global institutions, about the efforts of the Russian leadership to humiliate the UN and everything that the organisation represents. It requires a strong response.”

A day after the US president, Joe Biden, called on Congress to send up to $33bn (£26bn) to help Kyiv, Ukraine said it was taking heavy losses as Moscow’s forces, having failed to seize the capital, redoubled their efforts to fully capture the eastern Donbas region.

But it said casualties in the invading army were even worse. “We have serious losses, but the Russians’ losses are much much bigger … They have colossal losses,” a Ukrainian presidential adviser, Oleksiy Arestovych, said on Friday.

Britain’s defence ministry on Friday backed up that assessment, saying Donbas remained Russia’s strategic focus but due to strong Ukrainian resistance, “Russian territorial gains have been limited and achieved at significant cost to Russian forces”.

Zelinskiy’s office said Russia was pounding the entire frontline in Donetsk, one of the two Donbas provinces, with rockets, artillery, mortar bombs and aircraft, while Ukraine’s general staff said Russia was shelling positions along the line of contact.

The governor of the eastern city of Kharkiv, Oleg Sinegubov, said on Friday five civilians had been killed on Thursday in what he described as almost continuous shelling, with more than 2,000 buildings damaged or destroyed since the start of Russia’s invasion on 24 February.

Zelenskiy’s office also said an operation was planned on Friday to evacuate civilians from Mariupol, the devastated south-eastern port city that has been the scene of some of the bloodiest fighting and the worst humanitarian catastrophe of the war.

“An operation to evacuate civilians from the Azovstal factory is planned for today,” it said in a statement. The sprawling steel plant is the site of Ukrainian troops’s last stand in the besieged city but is also sheltering hundreds of civilians. Russia last week said it had gained full control of Mariupol except for the huge industrial area.

Guterres said on Thursday the UN was doing “everything possible” to ensure the evacuation of civilians from the “apocalypse” in Mariupol and Osnat Lubrani, a UN representative to Ukraine said on Friday she was travelling to nearby Zaporizhzhia to prepare for a “hopeful” evacuation.

Britain’s government said on Friday it was sending experts to help Ukraine with gathering evidence and prosecuting war crimes, with a team due to arrive in Poland in early May to investigate what the UK’s foreign secretary, Liz Truss, called Russian “barbarity … and vile atrocities, including against women”.

The bodies of 1,150 civilians have been recovered in the region around Kyiv since the withdrawal of Russian troops from the area earlier this month, with 50-70% of the corpses displaying bullet wounds from small arms, the Kyiv police force said.

Ukrainian prosecutors said they had identified 10 Russian soldiers suspected of committing war crimes – including premeditated murder, cruel treatment and other violations – in the Kyiv suburb of Bucha during their occupation of the town in March.

London is also deploying about 8,000 troops as well as 72 tanks and 120 armoured fighting vehicles, artillery guns, helicopters and drones for exercises across eastern Europe, defence officials said in a statement.

“The security of Europe has never been more important,” the defence secretary, Ben Wallace, said, calling it “one of the largest shared deployments since the cold war”.