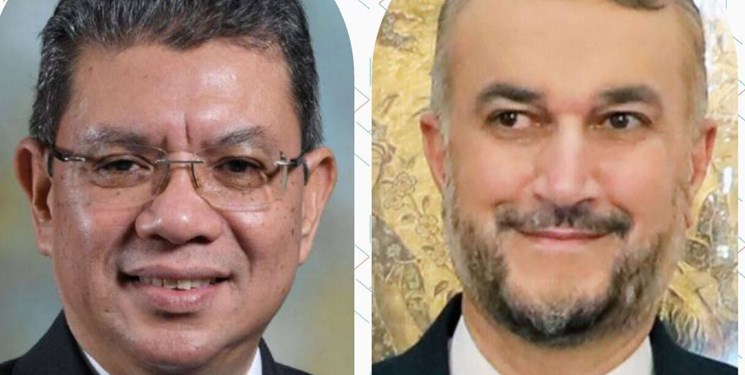 The Iranian foreign minister has held a phone conversation with his Malaysian counterpart to discuss a variety of issues including Palestine and holy Quds as well as bilateral relations.

Hossein Amir-Abdollahian and his Malaysian counterpart Saifuddin Abdullah discussed the Palestinian issue, regional and international developments, as well as bilateral issues by phone on Wednesday afternoon.

In the phone conversation, the top Iranian diplomat condemned the Israeli regime’s desecration of the holy sites in Palestine during the holy month of Ramadan and thanked the Malaysian Foreign Minister for condemning the actions of the occupying regime in Al-Quds and the support for the oppressed people of Palestine.

Amir-Abdollahian further pointed to the Organization of Islamic Cooperation (OIC) recent meeting amid the Palestine developments and said that the meeting should have been held at a higher level, namely the ministerial level.

He also called for the use of Malaysia’s membership in the UN Human Rights Council to condemn the Zionist regime and pressure it to lift the blockade on Gaza Strip, adding that “We strongly oppose the process of normalizing relations between certain countries and the fake Israeli regime.”

He emphasized the finalization of the memorandums of understanding between the two sides on consular and judicial issues and expressed gratitude to Malaysia for pardoning a number of Iranian prisoners in the country.

The two sides stressed the importance of further developing relations.

Congratulating the holy month of Ramadan and the arrival of Eid al-Fitr to the Iranian side, Mr. Abdullah stressed the need to intensify the joint efforts of the two sides in the OIC to support the Palestinian cause.

The Malaysian foreign minister also said that his country has good relations with all different Palestinian groups.

He added that Malaysia would never allow the Palestinian issue to be forgotten or the Zionist Israeli regime’s conspiracy to succeed in normalizing relations.