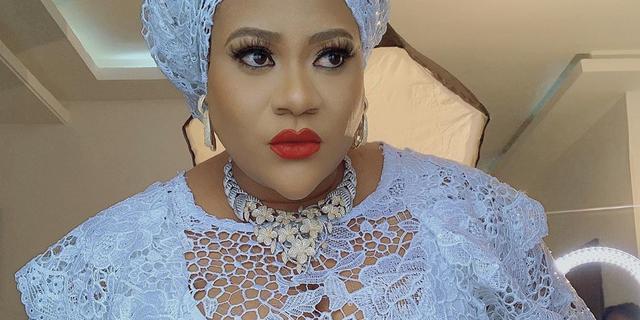 Blessing’s post is coming weeks after her messy split from Opeyemi Fagan. Nigerian actress Nkechi Blessing Sunday has advised her followers to never give up on finding love.

The actress was recently caught in a messy breakup with her estranged partner, Opeyemi Falegan.

The movie star made this known via her Instagram page on Monday, April 25, 2022.
“Regardless of what goes down, amidst plenty of chaos do not forget LOVE is a beautiful thing👌 I have soo much love in me that I am never afraid to fall in love❤️‍🩹,” she wrote.

“Cus d moment you love yourself more, it becomes easy to fall in love and be loved❤️ Never give up on LOVE💙💙💙#lovewins.”

It would be recalled that in April 2022, the former couple took to their Instagram accounts where they revealed that their union was over.
The actress gave reasons why they decided to call it quits.

According to Nkechi, her estranged hubby wanted to use her popularity for selfish reasons.

She explained that he became notorious for always begging for financial assistance to fund his foundation, a move that didn’t sit well with the actress.

READ ALSO: What to expect as Elon Musk bids to buy Twitter for $43 billion

She also revealed that Falegan was a jobless man who would stay at home for months without doing anything.

On Falegan’s part, the only reason Blessing decided to be with him was for sex and money.

“I know you want some things to be clarified and it’s high time I get it clarified. She came into my life for two things – money and sex,” he said.

The actress later apologized to her fans for lying to them that they got married.