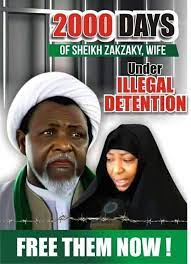 On Thursday, 02/06/2021 Islamic Movement in Nigeria marked the 2000th day of illegal detention of the leader of the movement, Sheikh Ibraheem Zakzaky, following a planned state terrorism meted on him and his followers by Buhari regime which left over a thousand members of the Movement, including women and children either dead or missing, while several amongst them were buried alive.

Peaceful free Zakzaky nationwide protests were held, attended by tens of thousands of Nigerians who marched asking Buhari regime to obey court order and free the revered Sheikh Zakzaky from illegal detention since 2016.

The Federal High Court in Abuja ruled that our leader and his wife should be released. It described their detention which began in December 2015 as “illegal and unconstitutional.”

This might be part of a wider effort to cover up the gruesome crimes committed by members of the security forces in Zaria in December 2015 that left hundreds dead.

And the refusal of the regime to comply with that court order has demonstrated its flagrant and dangerous contempt for the court of law.

However, we consider the silence of many Nigerians over the injustice and incarceration of Sheikh Zakzaky as the most unfortunate situation in the history of Nigeria.

Their silence on this great injustice is not different with those that supported it. Nigerians should remember “If you are neutral in situation of injustice, you have chosen the side of oppressors.”

Most of the time the silence of those that supposed to talk is more painful than the jubilation of opportunists, to borrow the word of Martin Lurther King JR:

“In the end, we will remember not the words of our enemies but the silence of our friends”.

Nonetheless, it is not too late for Nigerians to correct their mistakes of supporting the oppressors masquerading as the cabals of Buhari regime, by rising their voices against the atrocities and injustice on the symbol of unity; Sheikh Ibraheem Zakzaky.

Hence as we are marking the two thousands days of injustice and incarceration of our leader, we pray to Almighty Allah to enlighten the hearts of Nigerians to embrace the path of justice and rise up against tyranny.

Indeed as we approach six years since the most heinous atrocities Nigeria has ever committed against its own citizens in peace time, we are today reaping the consequences of our silence and failure to speak out when the Nigerian military laid siege on Gyallesu, massacring hundreds of followers of Sheikh Zakzaky and burying them in mass graves.

Their crime was not taking up arms against the state like the tribal separatist of the Southeast and Southwest, Boko Haram or bandits pillaging the north, but for allegedly blocking a road for a General in the Nigerian Army.

Today we are living witnesses to the fact that Nigeria is dysfunctional, insecure, and tottering perilously on the brink of a precipice because of the incompetence, irresponsibility, and intolerance of the Buhari regime, easily the vilest and most insular regime in Nigeria’s entire history.

To heal our wounds, we must remember that nobody is safe until everybody is safe, and justice for the detained leader of the Islamic Movement in Nigeria is a precursor to our stability and entrenchment of justice in our country.

It has been said, “The ultimate tragedy is not the oppression and cruelty by the bad people but the silence over that by the good people.” The Nigerian authorities must immediately comply with a High Court order and release the leader of the Islamic Movement in Nigeria, Sheikh Ibraheem El-Zakzaky and his wife from detention.

As we march on relentlessly in pursuit of justice for Sheikh Zakzaky and all those killed in Zaria in December, 2015, we wish to express our profound gratitude to all those who supported us, especially national and international human rights organization and the media houses here at home and the diaspora. We urge them to keep on with the struggle until Buhari regime do the needful and release our leader.