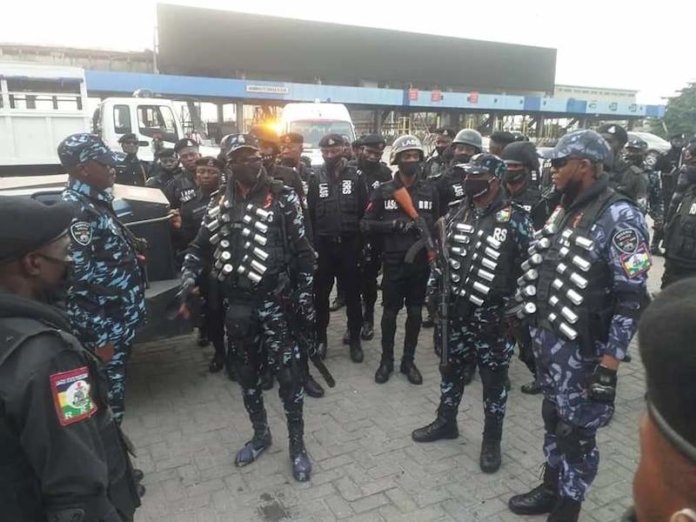 In readiness for the June 12 pro­test planned by some groups in the country, the Police were in battle-ready gear on major roads in cities across the states on Saturday.

Armed policemen on Saturday morning in Abuja violently dis­persed protesters demanding an end to bad governance, insecurity and unemployment in the country with teargas.

The protesters who converged at Gudu Junction were seen chanting #BuhariMustGo songs with plac­ards but were dispersed by joint se­curity operatives who fired teargas canisters into the crowd and dis­rupted the peaceful protest.

Many of the protesters were seen scurrying for safety while others were unconscious as a result of the fumes they inhaled from teargas.

But in Oyo State, the state gover­nor, Engr. Seyi Makinde, joined the youths in a peaceful protest.

The youths, in their hundreds, gathered themselves to demand good governance and they started their peaceful protest from Mokola Under Bridge, with heavy presence of security operatives to make sure that the protests was not hijacked by hoodlums.

Governor Makinde joined the protesters at the Bodija Housing Junction at the front of Aare Afe Babalola Building, Are Avenue Area of Bodija, Ibadan.

In Enugu, the Leadership and Entrepreneurship Advocacy (LEAD) Network, an NGO, called on Nigerians to brace-up to demand democratic accountability from elected political leaders.

Executive Director of LEAD Network, Mr Chukwuma Okenwa, made the call while speaking with newsmen in Enugu on Saturday on why Nigerians had not benefited maximally from democracy after 21 years.

Okenwa noted that democracy was people-driven and the people should as well derive maximal ben­efit from it and not the other way round, which was autocracy.

But in Bayelsa, armed security operatives carried out a show of force across the state capital city, Yenagoa, ostensibly to warn against any breach of the peace following the planned June 12 protests in the country.

Our correspondent observed that security was also beefed up around the Government House in Onopa area of Yenagoa with deployment of more security vans and Armoured Personnel Carriers, stretching to the Lam­bert Eradiri Road and Road Safety Road.

This happened despite the fact that the State Police Command had disclosed on Friday that it had no knowledge of any planned protest march in the state on this year’s Democracy Day celebration.

In Ondo, despite the appeal by the paramount ruler and the Deji of Akure, Oba Aladetoyinbo Al­adelusi, to youths in the capital city not to embark on the proposed protest slated for Saturday, youths in their hundreds trooped to the streets to protest the Presidency’s alleged support for open grazing.

The youths, who conducted themselves in peaceful manner, were seen walking through Oja Oba through Oba Adesida Road displaying placards with differ­ent inscriptions, including Kick ‘Against Open Grazing’.

They walked in procession through Oyemekun Road down to FUTA junction where they ad­dressed themselves on the reasons they should resist what they de­scribed as President Muhammadu Buhari’s insensitive to the lack of security of life and property in the South West.

In Ilorin, Friday’s show of force ahead of Saturday’s June 12 cele­bration by men of security agencies in Kwara State appeared to have kept residents, especially in Ilorin, indoors.

Station Roundabout, venue of a scheduled protest for Saturday, was all calm as people were seen going about their normal routines.

The security agencies in the state embarked on ‘show of force’ in Ilorin, the state capital, as part of measures to reinforce their pres­ence.

In Niger State, heavily armed security operatives comprising the Nigerian Army, Nigerian Security and Civil Defence (NSCDC), Nige­ria Police Force and other paramil­itary agencies, in the early hours, patrolled major streets and roads in Minna, the state capital, to possi­bly ward off protesters or those who had planned to join in anti-govern­ment protests.

As early as 8am, the joint pa­trol team, in convoys, moved from Chanchaga-Tunga area, Bosso road, western by-pass and Mai-tum­bi area, provoking fears amongst citizens who watched from their homes to catch a glimpse of what democracy day had to offer.

The Peoples Democratic Party (PDP), also on Saturday, condemned what it described as the violent clampdown by agents of the All Progressives Congress (APC) and President Muhamamdu Buhari on Nigerians who were peacefully pro­testing on Democracy Day.

The party described the clamp­down on citizens on Democracy Day as a sacrilegious demonstration of APC’s aversion to democracy as well as its barefaced repugnance towards Nigerians, particularly in their demands for their rights.

The PDP, in a statement by its spokesman, Kola Ologbondiyan, said: “It is awkward that the APC and President Buhari, who were al­lowed their freedom when they pro­tested in 2014, would turn around to subject Nigerians to actions of inhumanity including the use of firearms against the people, as be­ing witnessed today.

“It is instructive to note that President Buhari, in his supposed Democracy Day address, failed to rein in his security operatives de­spite the cautions by the PDP. This places the culpability for whatev­er befalls Nigerians, in the face of the violent attacks by security agencies, on the APC as well as Mr. President’s desk.

“The PDP is not surprised that in his over 20 minutes speech, Mr. President never made any commit­ment towards upholding the demo­cratic tenets of free speech, freedom of expression, freedom of associa­tion and right to peaceful protest, as enshrined in the 1999 Constitution and our statutes, from which he, as APC candidate, drew huge benefit in 2014.

“Our party is cataloguing all the infringements which the APC and President Buhari are rudely im­posing on Nigerians and we urge all global democratic institutions to take note of the violent infringe­ments and clampdown on democra­cy in Nigeria by the APC.”

Tension In Abia As Army Allegedly Clash With Gunmen

There was palpable fear in the air as heavy exchange of gun battle occurred between soldiers of 14 Bri­gade, Army Headquarters, Good­luck Ebele Jonathan’s Barracks, Ohafia, and unknown gunmen in Ohafia Local Government Area of Abia State.

It was learnt that the exchange of gunfire between the gunmen and soldiers caused residents and indigenes of Elu, Amangwu, Ebem and Amaekpu, Ohafia LGA, to flee from their communities to neigh­bouring villages in order to avoid being caught in the crossfire.

Unconfirmed sources stated that six soldiers and a member of the Eastern Security Network (ESN) were reportedly killed in the con­frontation.

The villagers called on Senator Orji Kalu, Senate Chief Whip, and other State and National Assembly members to come to their aides.

A source stated that many male youths in the community who feared being innocently whisked away by soldiers and other secu­rity agents left their homes in the village for other places of safety in the state.